Pretty much every car owner in the world has probably been asked if they want conventional or synthetic motor oil during an oil change appointment. Without hesitating, you might have just decided on conventional oil because it was the cheaper option. But besides the price, what’s the difference? Keep reading to learn more.

What’s the difference between conventional oil and synthetic oil? 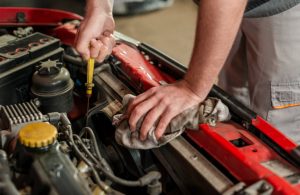 Yes, the most glaring difference between these oil types to the common driver is the price. But there has to be something worthwhile that makes synthetic oil more expensive, right? Synthetic motor oil is somewhat man-made. Most synthetic oils begin as highly refined crude oil and are then distilled. Synthetic oil comes with power additives and carrier oil that enforces even distribution of those additives. That all might sound like jargon, but what you need to know is that synthetic oil is much cleaner than conventional oil and it is better for your engine. Synthetic oil also has less of a chance of producing engine sludge.

Conventional oil does not provide the same protections for your engine. It doesn’t flow as well in cold temperatures and it doesn’t protect itself as much in high heat. To be candid, the only advantage of going with conventional motor oil is that it is cheaper. If you’re looking to save some cash in the short-term, but all means go with conventional oil. If, however, you willing to shell out a couple more dollars for greater engine protection, we recommend going with a synthetic oil.

Bring your Nissan to Matt Castrucci Nissan in Dayton for its next oil change service. Our technicians will get you in and out of the service center in no time!

Read more about our available services

Where can I get a Nissan oil change in Dayton OH?

This entry was posted on Tuesday, February 19th, 2019 at 10:15 AM and is filed under Services & specials, Tips and tricks. You can follow any responses to this entry through the RSS 2.0 feed. You can skip to the end and leave a response. Pinging is currently not allowed.